QCR has been called “the gospel of real life shit” (Divide and Conquer). The Queens, NYC-based band is home to the Southern-flavored songwriting of guitarist Marlon Hurt. As an expat Atlanta boy living in New York City, Marlon’s music showcases a meeting of opposites: blues and soul mix with indie flavors of pop and alt rock; ear candy and wordplay mix with danceable beats and poetry. This playful take on established Americana styles led some critics to declare QCR one of the best emerging bands of 2019 (Indie Spoonful; Please Pass the Indie).

QCR has had many amazing artists pass through its ranks, either full-time or as satellite players for live shows. Many are legitimate solo artists in their own right. These include: most prominently, the soul artist Jesse Maxwell and the singer-songwriter Jenna Vox, as well as Chris Glover, Michael LoBue, Lyndol Descant, and Alex Fedorow. 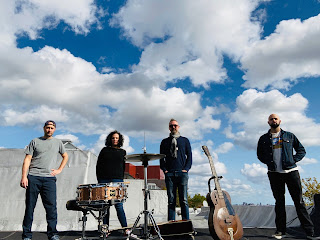 Rachel headed up the long-lived, Brooklyn-based soul outfit, The Irresponsibles. Marlon is the main songwriter of the group, and was the driving artistic force behind the original blues band, The Hurt Project. Hope is a trained pianist, a Brooklyn native, and half of the duo Hope and Maggie whose song videos have over a quarter million views on YouTube. Josh is a multi-instrumentalist from Boston, formerly with the group Wonder City. Dom was the bandleader for Backyard Soul. A.J. is a Queens native.

"one of the best emerging bands of 2019" --Indie Spoonful

"If I was a good executive producer I'd be able to tell you everything about this band" --Indie Music LIVE!
at June 05, 2017

Email ThisBlogThis!Share to TwitterShare to FacebookShare to Pinterest
Home